MONKSTOWN, a parish, in the barony of KERRYCURRIHY, county of CORK, and province of MUNSTER, on the new line of road from Passage to Cork, and on the western shore of the river Lee, at its confluence with the sea in Cork harbour; containing, with part of the post-town of Passage-West, 2199 inhabitants, of which number, 698 are in the village of Monkstown. It derives its name from a small establishment of Benedictine monks, called Legan abbey, belonging to the priory of St. John’s, Waterford, which was formed here in the fourteenth century, on a grant of land made to the original establishment by the family of McCarthy, being part of their manor of Marmullane; of the buildings there are no traces. 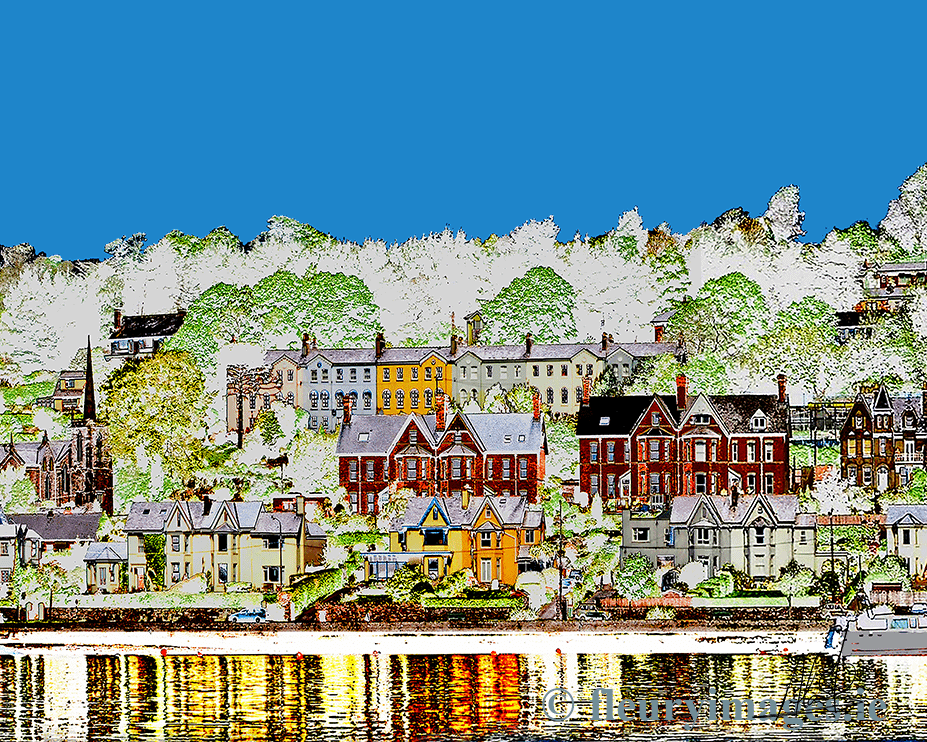 A house in the Elizabethan style was built on the side of a glen, in 1636, by Eustace Gould, called Monkstown castle: it is a gloomy structure, and was once rented by the government for barracks, but it is now used as a store-house by the proprietor, or lessee under Lords Longford and De Vesci, who, by the marriage of two heiresses, became possessed of this property, which had been forfeited by the Archdeacons, or Goulds, from their attachment to the cause of “King James II” in the revolution of 1688.

The parish is bounded on the east and south-east by the Lee and the harbour of Cove; it comprises 1546 statute acres, of which about 100 are scattered woodland and ornamental grounds, 60 rock, and the remainder arable and pasture; the annual value is about 1500 Pounds. The land is moderately well cultivated, though at a great expense, and the soil being fertile is productive of good crops of corn and grass. The rocks are of clay-slate, and, near Carrigmahon, are precipitous and interesting; the steepest is called the Giant’s Stairs, being a rocky promontory with receding ledges of rock, having the appearance of a rude staircase when viewed from the opposite bank of the Lee. There are several quarries of a red and brown stone, useful for many purposes, the former being chiefly used for lining limekilns. The river Lee affords every facility for water carriage, and here is excellent anchorage for vessels of all sizes.

The village, which has a penny post to Cork, comprises a great number of detached villas and cottages, many being new and very handsome, particularly twelve beautiful marine villas recently built close to the shore; they are constructed in the pure Elizabethan style, and are chiefly occupied by respectable families as bathing-lodges, for which purpose the village is most favourably situated. It is built on the sides of a deep glen, which is thickly clothed with beautiful and thriving plantations, much increasing the natural beauty of the scene: the prospect is very extensive, taking in the woods of Ballybricken, Rostellan, and Prospect.

The islands of Hawlbowline, the Rock, and Spike, with their numerous forts, depots, arsenals, and magazines; Ringskiddy, crowned by its martello tower; and the numerous vessels in the harbour.

Among the elegant residences scattered over the parish are Monkstown Castle, that of R. B. Shaw, Esq.; Rock Lodge, of J. Galwey, Esq.; Carrigmahon, of De Courcy O’Grady, Esq.; Rockville, of J. Taylor, Esq.; Bellevue, of N. S. Parker, Esq.; and the glebe-house, of the Rev. Alex. Stuart, besides several exceptionally beautiful houses in the portion of the town of Passage that is in the parish, which, by means of the new road, has become one place with Passage.

The road was designed by Robert Shaw, Esq.; it winds round the base of all the bold and wooded hills, only a few feet above the level of the highest tides, uniting Cork, Douglas, Passage, Monkstown, Carrigaline, and Kinsale: the estimated cost was 2700 pounds, one-third of which was to be paid by the barony, the remainder by the county.

The living is a vicarage, in the diocese of Cork and in the patronage of Lord De Vesci: the income of the vicar is 50 pounds per annum., payable out of the estate of Monkstown, and secured by the two noble proprietors. The glebe-house, with three acres of land, formerly the residence of Michael Westropp, Esq., is held by lease for ever from Robert B. Shaw, Esq., at 25 pounds per annum, derivable from “Archbishop Hugh Boulter” Primate Boulter’s augmentation fund.

The church, which stands on a picturesque elevation, is a cruciform edifice in the early English style, with a tower and spire, 70 feet high, at the east end: it was built of hewn limestone, in 1832, at an expense of 950 pounds, raised by subscriptions from the patrons and others; S. Hollingsworth, Esq., contributed 350 pounds, and the noble proprietors of the estate 100 pounds. It contains a fine organ and gallery: the west window is of stained glass, exhibiting the armorial bearings of the principal subscribers. The bell has on it this inscription:  Monkstown Protestant church, erected by voluntary contributions, collected in Ireland and England by Gerrard Callaghan, Esq., M. P. for Cork, and the Rev. A. G. H. Hollingsworth. The first Protestant church erected since the Reformation. Lord Longford and Lord De Vesci gave the endowment; Gerrard Callaghan, Esq., M. P. for Cork, first commenced the subscription, and gave the ground for the church; Robert Shaw, Esq., of Monkstown, gave the glebe in perpetuity. A. G. H. Hollingsworth, the first Protestant incumbent; William Hill, of Cork, architect. The church was completed in March 1832. Robert Shaw and William Andrews, In the R. C. divisions the parish is annexed to Passage West and part of Carrigaline, the parishioners attending the chapel at Shanbally.

The parochial and infants’ schools are in Passage; they were founded by subscription in 1836, on land presented by W. Parker, Esq., to be held so long as they shall continue scriptural schools: the parochial schoolhouse is very handsome and will accommodate about 250 children; it is open to all children of Monkstown and Passage and is supported by subscription. Besides these there are three private schools, in which are about 60 children. A parochial library has been established for the use of the poor, and an Indigent Room-Keepers’ Society has been formed; both are supported by subscriptions. There is a bequest of 10 pounds per annum., made by Mrs. Andrews, to the church, to commence after the decease of her husband.

Within the demesne of Monkstown Castle, on the side of the glen, are the ruins of a small chapel, which was the last retreat of a few monks from the abbey of St. Mary, Bath: it was subsequently repaired and appropriated by the Archdeacon family, as a domestic chapel. Numerous Danish forts, or raths, are scattered over the parish; and on an elevated situation a circle of exceptionally large stones, partly sunk in the earth, and placed upright, are supposed to be the remains of a druidical altar. Crystals of Irish diamond, noticeably clear and transparent, are occasionally found here; and there is a chalybeate spring.